European School of Economics Virtual learning in partnership with VEESO

This term at the European School of Economics’ campuses in Rome and in Florence, VEESO’s co-founders Mr. Elia D’Anna and Mr. Joseph D’Anna, gave us a glimpse into a classroom of the future through their newly created Virtual Reality (VR) headset. The set of VR goggles, first of its kind, codes our facial expressions through a complex set of infrared cameras and sensors and then projects them, in real time, onto a virtual avatar.

VEESO, in partnership with the European School of Economics (ESE), is developing a Virtual Reality technology for Education, aimed at overcoming many of the limitations of current distant-learning systems.
In conventional e-learning and video-based apps, class is confined to a small screen and as a result, teachers and subjects feel distant and less engaging. One of the main advantages of immersive technologies like VR and Immersive Audio, is the increased sense of presence. In VR, students have the feeling of sitting in a large classroom, together with their classmates and teachers.
This greater feeling of presence allows them to experience a much more engaging and effective education, very similar to live, in-person learning. Of course, VR comes with its limitations in terms of a lack of physical and emotional interaction among connected users. Nonetheless, it is a very strong and useful tool to counteract the current video-voice only communication, and is a step into the future of distance learning through augmented reality.

ESE is also proud to be a partner of project VEESO, which has the potential to become an important milestone in the future.

Watch this video for an interesting insight into the project: “train-the-VR-headset” 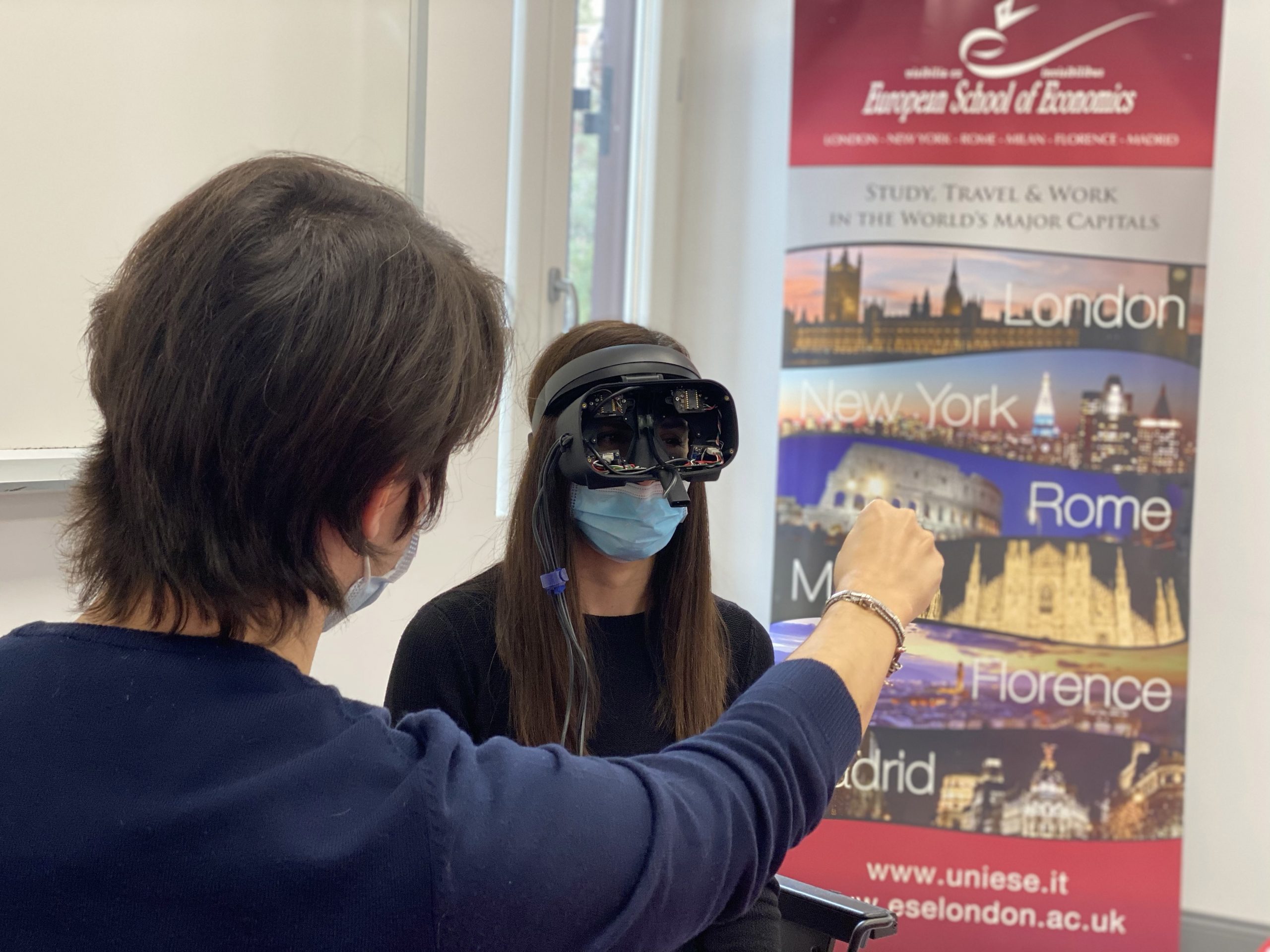 The Bachelor of Science (Hons) Business Administration aims to develop pro-active decision makers, managers and leaders for a variety of careers in business sectors in a...

ESE Florence had the honour to host  AC Milan football player and champion Alessandro Florenzi for a meeting with our...

Thanks to ESE Florence’s network, our fashionable students had the honor of being invited to Pitti Immagine Uomo...

ESE mission is to prepare a new generation of business economists and managers of international stature capable of...

Read more
This website uses Cookies. By continuing to use this site you consent to the use of Cookies on your device as described in our Cookie Policy. You can change your cookie settings at any time, though parts of this site may not function correctly without them. Read More.
Accept AllReject AllCookie Settings
Manage consent

This website uses cookies to improve your experience while you navigate through the website. Out of these, the cookies that are categorized as necessary are stored on your browser as they are essential for the working of basic functionalities of the website. We also use third-party cookies that help us analyze and understand how you use this website. These cookies will be stored in your browser only with your consent. You also have the option to opt-out of these cookies. But opting out of some of these cookies may affect your browsing experience.
Necessary Always Enabled
Necessary cookies are absolutely essential for the website to function properly. These cookies ensure basic functionalities and security features of the website, anonymously.
Functional
Functional cookies help to perform certain functionalities like sharing the content of the website on social media platforms, collect feedbacks, and other third-party features.
Performance
Performance cookies are used to understand and analyze the key performance indexes of the website which helps in delivering a better user experience for the visitors.
Analytics
Analytical cookies are used to understand how visitors interact with the website. These cookies help provide information on metrics the number of visitors, bounce rate, traffic source, etc.
Others
Other uncategorized cookies are those that are being analyzed and have not been classified into a category as yet.
SAVE & ACCEPT